New DO school readies for inaugural class in August 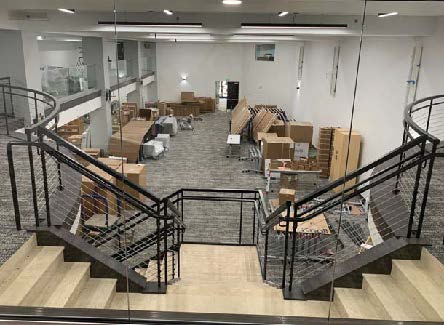 Aug. 1 is the first day of school for the inaugural class of 85 doctors in training at the college’s robust downtown campus, an airy 116,000 square feet at 217 E. Douglas Ave. It holds the title as the first osteopathic medicine college in Kansas.

Applications to attend the brand-new school topped 1,800 as of the deadline, April 15, and school administrators are still interviewing to see who will fill the remaining available seats. The school began recruiting students the day before Christmas, after the college received pre-accreditation status from the Commission on Osteopathic College Accreditation. It will hold onto that status until it graduates its first class of doctors in four years and takes on the final accreditation title. 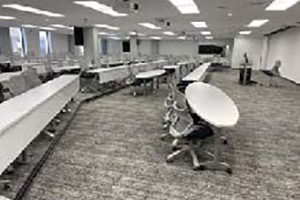 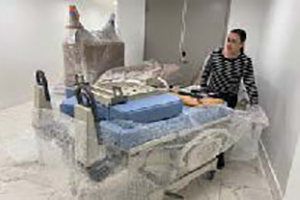 “We’re in our new building and we’re literally just finishing up a lot of the final electrical equipment in the building – everything from monitors in the auditorium to all of our non-cadaveric anatomy lab,” said Joel Dickerman, DO, founding dean and chief academic officer.

He counted off some of the cutting-edge technology KansasCOM boasts as part of its frontier learning concept: anatomical models, large screen monitors, VR headsets – all designed to help students learn anatomy while working on 3D models in virtual reality.

“It’s not that cadavers aren’t helpful,” Dickerman said. “But this allows you to see anatomy in three dimensions. It’s a lot more pathology vs. what you may have in your cadaver. It provides for a richer learning experience.”

With an eye for Kansas-based students and a commitment to clinical rotations throughout the state, Dickerman and Masson estimate they eventually will have at least a 60% or higher chance of retaining physicians in Kansas.

“As a nonprofit institution, our goal is to make an immediate and lasting impact on the health of all Kansas communities,” Masson said. Officially pre-accredited and ready to teach its first round of medical students, the school now “can begin to address the state’s physician shortage while simultaneously addressing other issues affecting population health.”

The college will expand to 127 students in year two and 170 in year three, its full complement. Whittling down the applicants means offering spots to students who seem the most
compatible with the college’s core foundation: a new, technologically advanced curriculum that relies on virtual, interactive AI models, a desire for a well-rounded education with an emphasis on primary care (or other shortage areas such as pediatric internal medicine and women’s health), and, ideally, an interest in living and working in Kansas. “They’ve got to want to be in the inaugural class,” Dickerman said. “They’ve got to have that pioneering attitude.”

Dickerman, who helped open Rocky Vista University College of Osteopathic Medicine in Denver in 2006 – which has since expanded into Utah and is looking to open a new campus in Montana – said his vision is to make Wichita a health career training hub.

With the University of Kansas School of Medicine-Wichita, Wichita State University and a number of other local colleges that specialize in health care careers, the opportunity for Wichita to appeal to MDs, DOs, nurses, RTs and more has never been so ripe.

“We’re not here to displace anybody,” Dickerman said. “Wichita can be as big a hub as Denver or Kansas City. We need more doctors, so we need to train more. Anybody who wants to come to Kansas and train is welcome, and Wichita is becoming a very well-known education hub for medical people.”