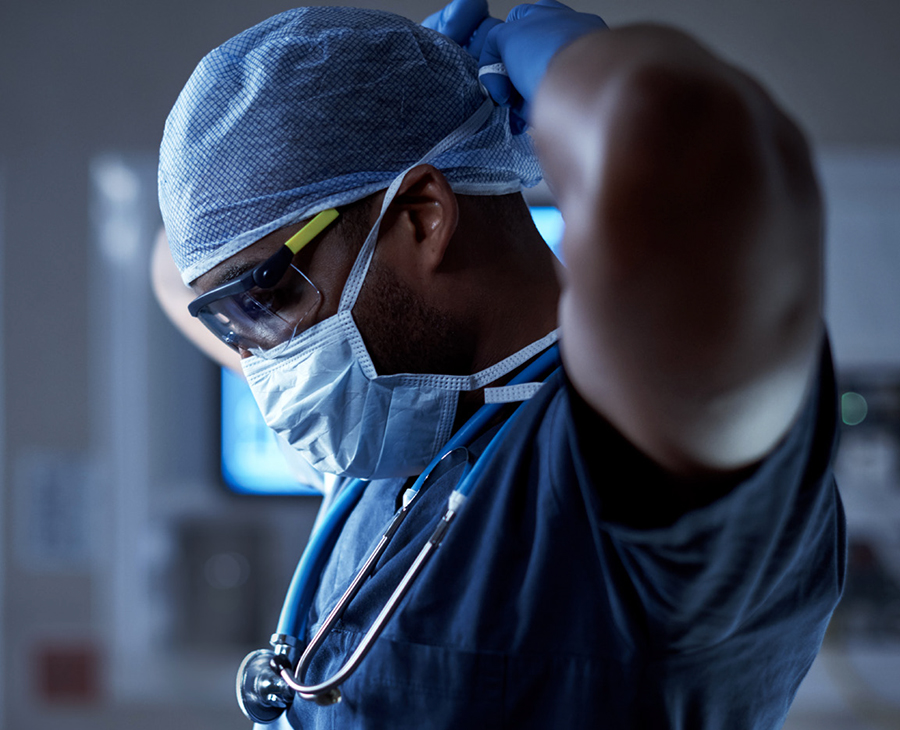 The 2021 documentary “Black Men in White Coats” pulls no punches: Black men are dying from prevent­able medical conditions, in large part because there are not enough Black male physicians.

Only 2% of U.S. doctors are Black men and Black men have the lowest life expectancy in America, says Texas physician, author and social change influencer Dale Okorodudu, MD, who started the grassroots movement Black Men in White Coats in 2013.

“We are in a crisis,” Okorodudu said. “Black men are going to continue dying.”

Six virtual screenings of the documentary were held recently in Wichita – two through the Medical Society of Sedgwick County, two at the University of Kansas School of Medicine-Wichita, and one each through the Wesley Medical Center and Via Christi Family Medicine residency programs.

The 80-minute documentary dissects the systemic barriers preventing Black men from becoming medical doctors and the consequences on society at large. One recurring theme is the dearth of Black men as role models. Okorodudu writes that a large number of highly qualified minority and economically disadvantaged Black students were having their medi­cal career dreams crushed simply because they had nobody to show them how to do it.

“You can’t be what you can’t see,” Okorodudu says in the film. “There are so few African Ameri­can males in medicine because we just don’t see ourselves. If you don’t see your dream, it’s hard for you to imagine it.”

The goal of the screenings was to raise aware­ness of the severe lack of Black male physicians and the impact that has on community health, said Phillip Brownlee, MSSC executive director. Research has found that Black patients, particularly Black men, tend to have better health outcomes when seen by Black physicians.

But there were fewer Black men applying for medi­cal school in 2014 than there were in 1978, the film says, citing a study by the Association of American Medical College. Today, only 4.4% of residents in training are Black, and 1.5% are Black men.

“The responsibility falls upon the people who decide who get into medical school,” Okorodudu said. “Make something happen today. The people in the best position to do that are the medical schools.”

The film talks about changing a system that relies too much on standardized test scores, and the need for medical school admissions boards to get better at identifying intelligent, compassionate Black students and helping them pass through the gates.

Organizations such as MSSC and the KUSM are working to tear down those barriers through education and programs that actively support recruiting more Black men – and women – into medicine.

“MSSC has been working on ways to increase the number of Black physicians practicing in Sedgwick County,” Brownlee said. “It started a mentoring initiative for Black residents. It also is looking at ways to increase the pipeline of medical students from underrepresented populations.”

The KU School of Medicine created two new programs aimed at increasing the racial diversity of physicians, with a particular focus on Black males. The impact is already big: KUSM believes it has the largest number of first-year Black medical students of any school in the country other than historically Black colleges and universities.

The Barbara Sheffield Scholarship Fund provides full-tuition scholarships for Black students to KUSM, including KUSM-W. The number of scholarships offered may vary – and may not be awarded every year. This year, KU awarded eight scholarships. One of the recipients, Kenneth Burnett, is a KUSM-W student.

The second initiative is called the Urban Scholars Program for Students Underrepresented in Medicine. It is similar to the Scholars in Rural Health program but will focus on students from Wichita, Kansas City, Topeka and Lawrence. Participants must commit to practicing medicine in urban areas and working on health equity.

A pilot program begins next fall in Wichita and Kansas City, Kansas, with applications open this Dec. 1. To apply, a student must be at least a sophomore in college and have two years remaining in school. The program includes mentoring and shadowing and required coursework. Students who complete the program and achieve the required GPA and MCAT score are guaranteed admission to KUSM.

KUSM hopes these initiatives will address both the racial imbalance of medical students and some of the inequities in health care.