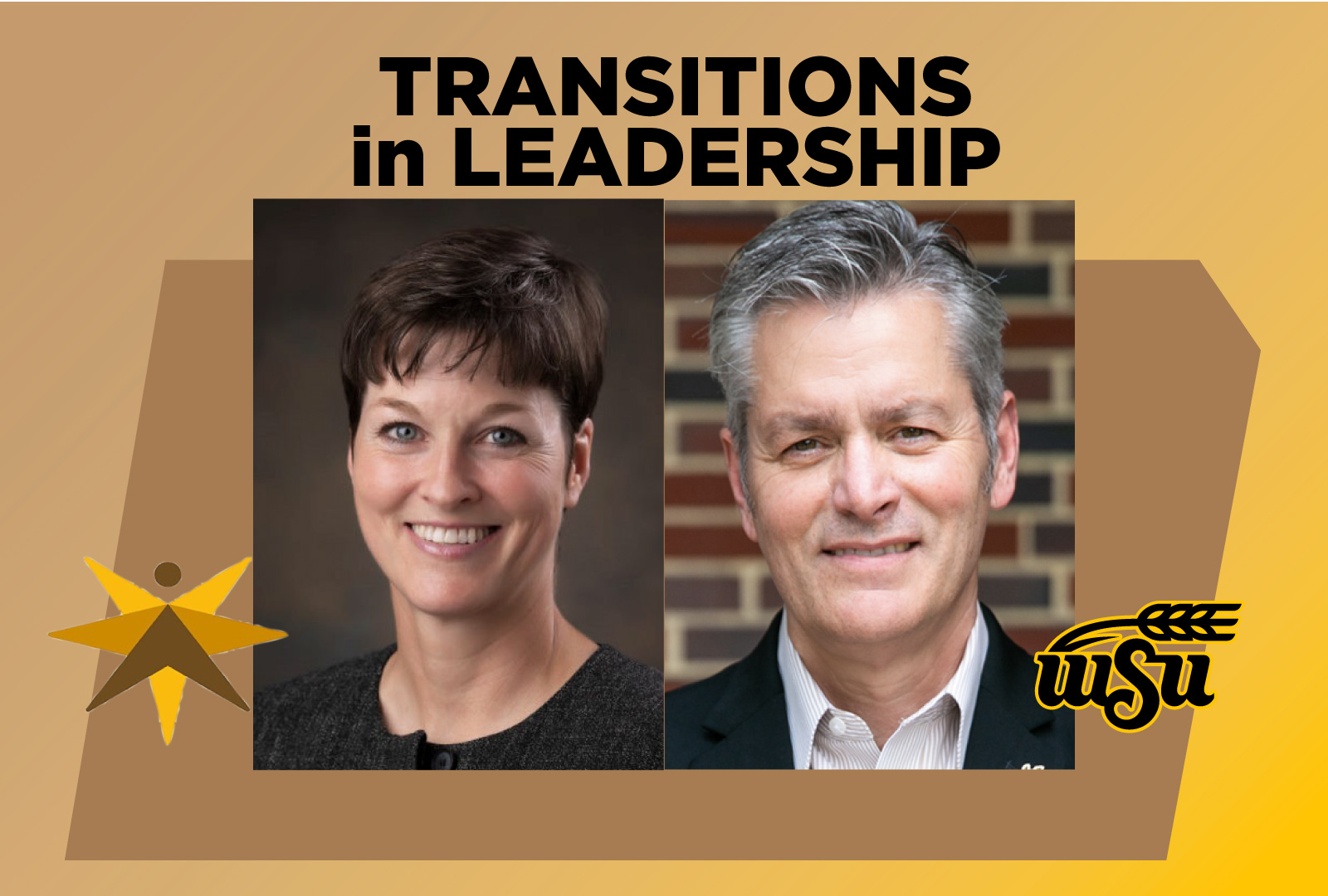 Because of COVID-19 concerns, MSSC canceled its September membership meeting that was to feature two new leaders in the community: Teresa Miller, president and CEO of the Kansas Health Foundation, and Rick Muma, president of Wichita State University. But MSSC still wanted its members to learn about Miller and Muma and their priorities this year and beyond for Kansas and this community.

Longtime health and human services policymaker Teresa Miller stepped into the role of CEO of the Kansas Health Foundation last May, bringing with her years of state-level leadership focused on issues such as improving access to health and nutrition services, early education programs and health care quality.

She had been secretary of the Pennsylvania Department of Human Services since 2017, and before that served as Pennsylvania’s insurance commissioner, held leadership roles at the Centers for Medicare & Medicaid Services, and was administrator of the insurance division at the Oregon Department of Consumer and Business Services.

“So, if we look at life expectancy in Kansas, across the whole state, it’s 78.6 years,” Miller said. “But 13 census tracts in Kansas are below 70, and the majority are in Wyandotte, Shawnee and Sedgwick counties for the most number of census tracts under 70.”

Sedgwick County, she said, houses seven of those 13 tracts, but Wyandotte County has the lowest life expectancy of 62.5 years, which is 27 years lower than the census tract with the highest life expectancy. Miller said the numbers didn’t completely surprise her, citing a 2018 article that listed Wichita as the third most redlined city in the country.

“When you look at disparities, there’s a huge correlation in areas historically redlined and the disparities we see today,” she said. “It’s not a shocker. Redlining played a huge role in Wichita’s history. There are a lot of housing segregations in the city.”

And, according to the National Community Reinvestment Coalition, there are statistically significant associations between greater redlining and general indicators of population health, including increased prevalence of poor mental health and lower life expectancy at birth.

In helping shape KHF’s influence on relevant health programs, Miller is evaluating these health disparities and taking into consideration other factors. These include an aging population throughout the state and increased concentrations of diversity, such as a growing number of Black and Hispanic populations that are more impacted by life expectancy and health disparities.

“If you look currently, the Black and Latin populations in Kansas on average have a lower life expectancy and higher occurrences of major illnesses, lower income and education attainment than do white people in Kansas,” Miller said. “We can focus our efforts now in communities of color to change the outcomes for future generations.  If we don’t, our entire state will struggle with lower health outcomes while facing increasing financial challenges.”

KHF views health as so much more than health care, Miller said. Health is about the economy, the workforce, education, voting, housing, transportation, the criminal justice system and more.

Miller said KHF can play an even more impactful role by focusing on communities with the greatest health disparities and engaging more in the policy arena to advocate for broader and more long-lasting change.

“One of the things we talked about as we move forward is targeting efforts in the areas with the greatest disparities, really getting into those communities in a much more meaningful way than we have done historically,” she said. “Really partnering with all the entities working on those areas and working directly with the communities to understand what their needs and desires are.”

KHF, which has provided more than $600 million in grants to improve health in Kansas communities over the past 35 years, is so much more than a checkbook, Miller said. The organization wants to look beyond health care alone and get to the root cause of health disparities while increasing its policy footprint around issues that affect community health.

“Going forward, we want people to view us as a partner, working side by side with someone who’s interested in figuring out how a community can achieve its goals,” Miller said. “It may or may not be a check we write.”

Rick Muma became the 15th president of Wichita State University in May. As a longtime health care practitioner, Muma said he is right at home balancing the priorities of a public research university, which he said is not much different than managing better outcomes in health care: boosting access for minorities, helping ensure there is a talent pipeline for graduates, and increasing the prosperity and health of the community.

Muma earned a bachelor’s degree in Physician Assistant Studies, a Master of Public Health in Community Health, and a PhD in higher education administration. He has held a number of positions at WSU since joining the faculty in 1994, including director of the PA program from 2002-08, chair of the Department of Public Health Sciences, assistant provost and then provost in 2018. He has written numerous peer-reviewed articles and has edited four books on HIV infection and patient education.

In all, Muma has more than 30 years of experience as a professor, administrator and physician assistant in internal medicine and infectious diseases.

Muma says his top goal is affordable access to education, especially for underrepresented minority groups. One of the biggest problems, he said, is there isn’t enough need-based aid for our underserved student population. One in four of WSU’s freshman class identifies as an underrepresented minority and, across the six state universities in Kansas, Wichita State hosts 20% of Pell eligible students.

“We have great academic programs, great opportunities for students, and we’re doing everything we can to lift up this community and make sure everybody has access,” Muma said.

Muma said WSU is on track to be a Hispanic-serving institution by the end of the decade, which means 25% or more of full-time equivalent enrollment are Hispanic or Latino. Education, like health care, needs to reflect more diversity both from a student and faculty perspective, he said. This diversity continues to be an opportunity for growth.

“We have a bigger population to draw upon,” Muma said. “We’re above here where we were in pre-COVID times. We had a huge increase in freshmen this fall and international students.”

He said he’s focused on filling up funding holes that create roadblocks to access. Many low-income students are eligible for Pell grants and some for merit-based aid from the institution, but there remains a gap in their ability to pay the full cost of tuition.

To cover that gap, WSU has reallocated more than $7 million toward increasing enrollment, mostly through need-based aid. “That’s really starting to pay off,” Muma said.

“He also wants to make sure WSU and Wichita’s businesses – the people who hire WSU’s graduates – are aligned. “I am laser focused that we have the right kinds of degrees needed in our economy here,” Muma said.

A big area is digital: data science, analytics, art, cybersecurity, homeland security, etc. Muma said everything eventually will be touched by the digital transformation and he’s fortifying WSU’s academic programs with the right tools to meet demand, including an enhanced focus on linguistics. WSU also boasts about 25 new companies right on campus, expanding the learning opportunities.

“We’re constantly making sure we’re meeting business’ needs,” he said. “One of our main priorities beyond that is every student has the opportunity for an applied learning experience.”

Muma’s third overarching priority is to increase the prosperity of the Wichita community focused around work on the Innovation Campus, which attracts companies centered on digital issues, research and testing, and new technology.

He said the campus is getting ready to break ground for a national research and testing site. “The idea is we’ll create new businesses and jobs for our community,” he said.

Muma also notes that he’s been in talks with KU over the past few years about jointly building an academic health science center that would benefit both academic institutions. That is still a goal for Muma, who earned his academic stripes in Texas where multiple medical schools worked together to improve education, community health and patient outcomes.

“The idea now is building a joint facility somewhere near the downtown area where we’re all working together and sharing space,” he said. “My dream is to create an interprofessional environment for training, to improve outcomes, innovation and research.”