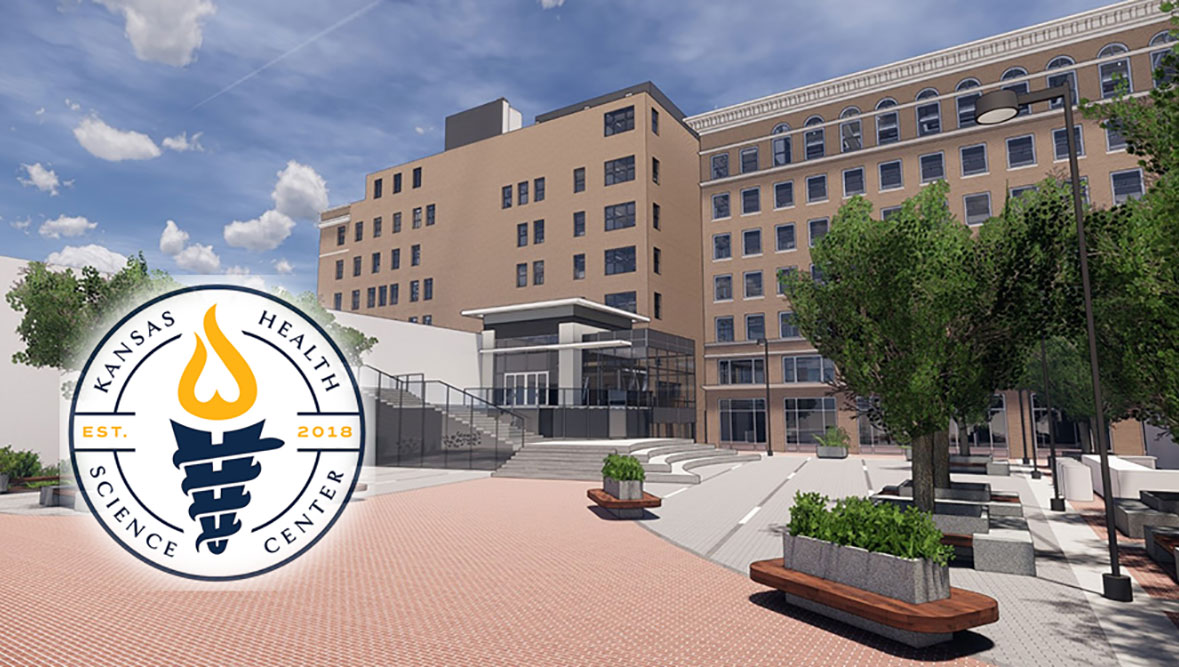 The Kansas Health Science Center – Kansas College of Osteopathic Medicine is on track to host its first class of DO candidates in 2022.

Construction is nearly done on the $75 million redevelopment project of five downtown buildings along Douglas and William streets, which is anticipated to be finished and ready for occupancy by December or earlier, said Joel Dickerman, DO, KHSC dean and chief academic officer.

Dickerman and KHSC President Tiffany Masson, Psy.D., provided updates to the MSSC board of directors on June 30, describing the school’s planned curriculum, community-based education methods and plans to address residency challenges while bringing more doctors to rural areas in Kansas.

Nationally, Kansas ranks 40th in physicians per capita, underscoring a shortage of physicians that is expected to climb to as many as 50,000 to 120,000 by 2032, according to the Association of American Medical Colleges.

In addition, 30% of Kansas physicians are nearing retirement, which was exacerbated by COVID-19, creating an opportunity for the DO school to complement the already robust and well-respected University of Kansas School of Medicine-Wichita, Dickerman said.

“This is not to point out any shortcoming on the part of KU,” he said. “KU has done a tremendous job of training physicians and relocating physicians. From what we’ve seen across not only Kansas, but across the whole country, there’s a predicted shortage of physicians.”

The issue of not having enough physicians to cover rural Kansas is a continuing problem. The Kansas Department of Health and Environment’s 2018 Health Professional Underserved Areas Report stressed that ongoing efforts are needed to fulfill a perpetually underserved population that lacks adequate medical care.

The KHSC hopes to be a part of the solution by, among other things, training more primary care doctors to address the shortage of roughly 720 PCPs in rural Kansas, Dickerman said. The American Osteopathic Association cites nearly 57% of DOs practice in primary care specialties: 31.4% are family physicians, 18.1% are internists and 6.89% are pediatricians.

“Our mission is to increase the number of physicians who train and hopefully return to Kansas,” Dickerman said.

One way the DO school plans to do that is by using a clinical presentation model as its curriculum. It’s a problem-based curriculum that is designed to introduce students into “clinical vignettes” and problem-solving from day one. “It’s shown not only to get students engaged, but actually helps performance on national boards,” Dickerman said.

The school also plans to put students into clinical immersions in their first and second years rather than waiting for the traditional third and fourth years. The school is focused on team-based learning, small groups and community-based partnerships for service projects. Simulation also will play a role in helping prepare students for clinical immersion, clinical rotations and residency, officials said. The DO school also will offer non-clinical tracks for students leaning toward research, administration or other fields.

“We’ve been listening to the community in Wichita and across this great state … to really understand what it means to meet the needs of our own community, what it really means to prepare the physician of the future,” Masson said.

KHSC leaders said they plan to help develop residencies in Kansas, including in communities such as Garden City with hospitals large enough to host them. They are identifying preceptors through the credentialing process and will encourage students to train more in their communities, among specialty areas, rather than do all hospital-based rotations.

“We’ve got to give our students exposure, ambulatory experience,” Dickerman said. “There has to be a balance.”