Under fire for keeping communities safe 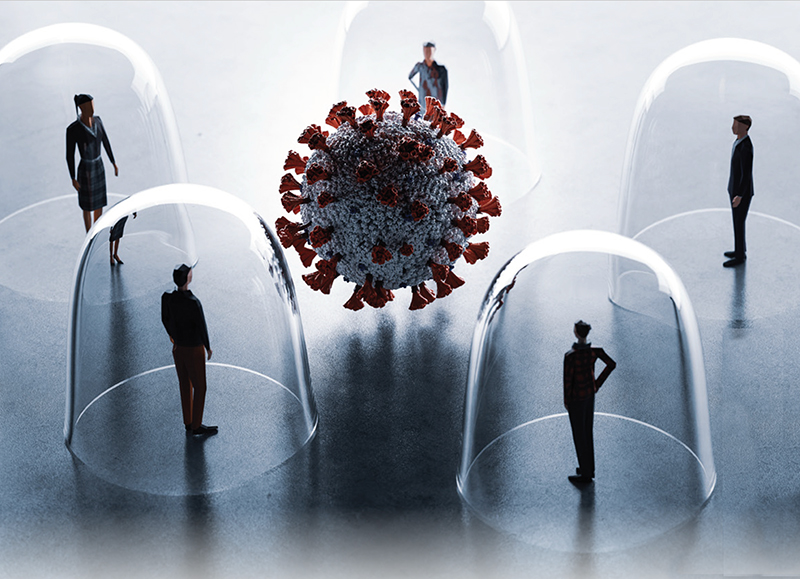 Public health officers in Kansas and across the U.S. faced a range of reactions to their pandemic
orders – some of them threatening

Those days of quietly strong-arming disease outbreaks that were mostly containable and that usually petered out before reaching epidemic status – think H1N1, SARS, etc. – are sidelined now, usurped by the volatile, unpredictable and highly contagious coronavirus, now a worldwide pandemic of the kind that hadn’t been seen by most people alive today.

Public health officers, once behind the scenes, have been thrust into the limelight, the direction of their counties and states placed squarely on their shoulders in a no-win situation that was made worse by people’s varied reactions to their orders.

More than 180 health officials across the U.S. have resigned, retired or been fired during the pandemic, the National Association of County and City Health Officials (NACCHO) said, citing data collected by Kaiser Health News and the Associated Press.

In Kansas alone, more than 30 health officials have left their posts since the pandemic’s start, a Kansas Department of Health and Environment spokeswoman told CNN.

That includes Gianfranco Pezzino, MD, who served as the Shawnee County health officer for nearly 14 years. Pezzino resigned in December, after county commissioners decided to relax the rules on one of his public health emergency orders — which, he told CNN, came at a time the county was seeing its “worst” coronavirus numbers since the pandemic’s start.

“You value the pressure from people with special economic interests more than science and good public health practice,” he wrote in his resignation letter to the commissioners (available on Kaiser Health News at khn.org). “In full conscience I cannot continue to serve as the health officer for a board that puts being able to patronize bars and sports venues in front of the health, lives and well-being of a majority of its constituents.”

Sedgwick County Health Officer Garold Minns, MD, said he’s fielded the gamut of disagreeable responses to his county health orders, ranging from resignation to angry criticism, but he has operated under the overall support and encouragement of both county officials and residents. Not everyone has been happy with him, he said, but most everyone has been civil.

“Fortunately, I’ve sensed a level of respect in this county that maybe hasn’t existed in all counties around the state,” Minns said. “I’ve gotten some very angry letters – some very strongly worded letters that disagree with me – but I guess we all have different thresholds. People may not agree with me, but they understand I have a job to do and respect the fact that I’m trying to do it.”

In Wilson County, Jennifer Bacani McKenney, a KUSM-W graduate who did her residency at Ascension Via Christi, has served as the health officer for nearly a decade. She said that while a majority of people in her community have been supportive, she and her co-workers became the targets of “loud, outspoken dozens” who heavily opposed masks “because of their rights and liberties,” she told CNN.

Even as the state lifted some restrictions, McKenney held out on her stance to continue safety measures. It did not sit well with some. She said she was called names. Her mask mandate was compared to the Holocaust. Some people drove by her home and filmed her. She was escorted after meetings by sheriff’s deputies for safety concerns. Although she has said she has no plans to quit, the harassment takes its toll.

“I think there’s a lot of fear. And there’s so much unknown,” she told NBC News in December. “People want to blame something, and they can’t blame a virus that is too small to be seen. So they blame people like me.”

Others said enough is enough. Vicki Collie-Akers, professor of population health at KUSM-Kansas City, told Kansas News Service that many of the health officials in Kansas who are leaving are doing so “because they can’t manage both the pandemic crisis and the harassment and denigration that’s come with it.”

In the end, the pandemic backlash against public health orders lands at the front door of reason. Public health officials must understand the science and make decisions based on the best information available at whatever stage the pandemic resides, Minns said.

Sometimes folks will have to just agree to disagree.

“I acknowledge there are opinions out there and you will find people who disagree about everything and anything,” Minns said. “You can’t just sit and ruminate about it. We’ve got a job to do and it’s our job to stick with it until it’s over with.”