Vaccine distribution underway, but not without challenges 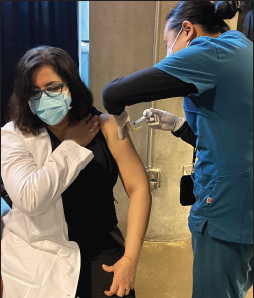 COVID-19 vaccinations are underway in Sedgwick County and much of the state, but the process isn’t running as smoothly as many health leaders would like.

A disjointed federal and state vaccine rollout with limited information on vaccine availability and how frequently doses would arrive colored the local vaccination effort, leaving public health officials scrambling to coordinate dissemination, particularly as they look to organize the second phase.

“Nobody knows from week to week what they will get,” said Adrienne Byrne, Sedgwick County Health Department director. “When KDHE finds out, they have to decide who gets what. Then we get 24-48 hours’ notice prior to receiving vaccines at our door. Luckily, we already had a clinic set up, so we could jump right into it.”

From Dec. 22 through Jan. 11, the Sedgwick County Health Department gave 7,780 doses of the vaccine to health care-associated workers – on track to tap out its initial 9,900 doses – bringing the number of estimated vaccines provided to health care workers to 18,000 when factoring in doses given by local hospitals.

That means most physicians, their staff and many health care-associated workers have been provided an opportunity to be vaccinated, health officials said. Although the throughput was a little rocky at first – “Not many people got it that first week,” Byrne said – the first phase of the vaccine for health care-associated workers has gone well enough.

“We are fortunate enough that we have public health emergency preparedness staff that we hired contractually to come back and help – staff that worked for us in 2008-09 for H1N1 and knew how to set up a large-scale clinic,” Byrne said.

The challenge now is shifting vaccine dissemination to the general public as part of Phase 2 in the next few weeks, starting with people 65 and older, high-contact critical workers, and those living or working in licensed congregate settings. But health officials said effective planning for that is plagued by a number of obstacles, including:

Little warning before receiving a supply of doses – and not generally knowing how many doses to expect – makes it hard to plan in advance.

About 70,000 people in Sedgwick County are 65 and older, but some are covered by nursing homes. Officials are mulling over how to communicate and offer vaccines to a population where some aren’t mobile or don’t have internet access.

So far, the Sedgwick County Health Department has received vaccines in very small quantities. Officials worry how to partition that out quickly and equitably.

Sedgwick County has tried to strictly stick to KDHE guidelines on vaccine dissemination when other states and even other counties in Kansas are following their own rules.

“Overall, this is going a whole lot like the virus has gone – kind of rocky,” said Garold Minns, MD, Sedgwick County’s public health officer. “The vaccine is not being produced fast enough and we’re not getting the amounts we’d like to see.”

Sedgwick County initially is receiving fewer than 2,000 does for Phase 2, even though the total number of people in this phase is about 150,000. As a result, it is initially limiting vaccinations to those 90 and older.

“I think we’re all struggling with, in the face of inadequate numbers of vaccine, how do we distribute this in a way that doesn’t cause the population to feel like this is not a very efficient, effective way to get it,” Minns said.

Another issue is the vaccine pipeline, which amounts to at least four separate points of entry in Sedgwick County: the health department and community clinics, the hospitals, and specific pharmacies federally contracted to take care of nursing homes. Data on how many vaccines are given out and to whom among these entities is not centralized or even available in some cases.

Hospitals received their own supplies, which they’ve used to vaccinate their medical staff and employees, and are now looking toward their at-risk patient populations. Ascension Via Christi also is working with the state to be a distribution site for the public through Ascension Medical Group. “We are in the planning stages to offer the vaccine to the public if KDHE will allow us,” said Jim Garrelts, pharmacy director for Ascension Via Christi.

Nursing homes are being coordinated separately through federal contracts with CVS and Walgreens. For Phase 2 dissemination, that leaves the county, some community health agencies and physician practices who’ve signed up to be distribution points.

To complicate things, Minns said he learned that Dillons may be providing the vaccine as well.

“We’re brainstorming right now,” Minns said. “It’s not as much vaccine that we need and we’re not getting timely information about the next doses.”

The good news is eventually the vaccine will get out to everyone. Health officials expect by this summer the majority of people – particularly those 65 and older – will have had the opportunity to receive the vaccine.

“We will get there,” Byrne said. “Eventually there will be enough vaccine for everybody.”